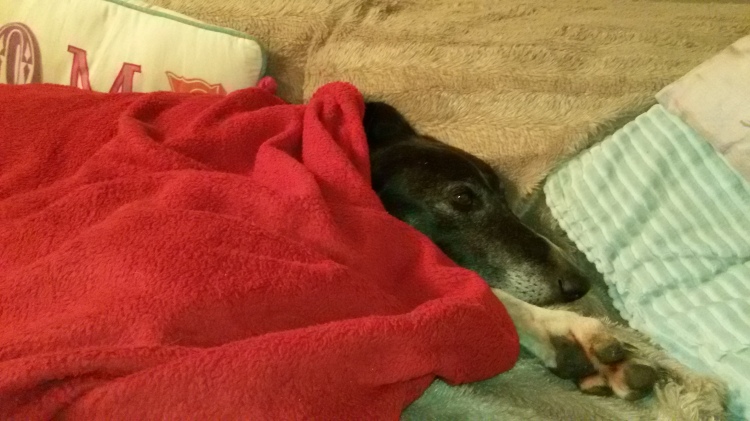 Apparently yesterday was the most depressing day of the year. Something to do with Monday and darkness and no money and it all makes sense really.

On a day, presuming that Tuesday is equally as depressing as Monday or does it get better? when we probably all feel like doing what Tom is doing in the photo which is just snuggling down under the covers, I thought I’d write something a bit cheerful for a change.

Now, over recent times, I haven’t really given myself over to cheerful thoughts. There’s too much to be pissed off about but I thought I’d give cheerful a go and give thanks for some good stuff that is going on. Here goes…

I could actually go on but I’ll stop there. Apparently being grateful makes you healthier so that’s a good a reason as any to give thanks for things. We are lucky, so so lucky, for where we are born, for so many things. I have no idea why we are so lucky and some people are so unlucky but I definitely feel inclined to share that rather than bemoan the fact that other people want in on a bit of that luck. Who wouldn’t? Finally, thank you for reading this.

Welcome to 2018, we are a week into it and we haven’t yet been nuked so things are not looking as bad as they could do. I have stolen this photo from a friend who sent it from the other side of the world where the sun is currently shining and she assures me that things are just as insane her end of the world too. Whether that is a consolation or not remains debatable.

I don’t know whether you do new year resolutions or not but I have been thinking about how to approach this year so as not to go nuts. In the words of H.G. Wells – ‘Am I dreaming? Has the world gone mad – or have I?’ That is what it felt like last year and I feel like I need to change that a bit. It’s hard to create positive change, to actually make it happen, if you feel completely disillusioned and depressed and think that the whole world has disappeared up the Swanee without a paddle so I’ve decided to try and look at things a bit differently.

There is a fine balance to be had between searching out in the world, trying to understand what’s happening, trying to do your bit to make this world a slightly better place and hanging onto a bit of healthy headspace. I’m not entirely sure what the answer is but one of them is the way we take notice of the media. News is dished out on so many media forms now that it is hard to discern what is real, what is complete fiction, what is put out there just to keep us all terrified, what is put out there for the benefit of goodness only knows who. One of the big differences now, though, is the fact that not only do we have to find ways of responding to what has happened in the world, responding to the news that we read/hear about but we also have to work out how people are interpreting and reacting to what has happened. In the meantime, what has actually happened can get lost. Take, for example, a terrorist attack. People get killed. Innocent lives are lost. That is the event that is reported. The reaction to that event can completely overwhelm what has happened and not in a healthy way. Innocent people are persecuted, their lives made a misery, not by what happened but by people’s reactions to what has happened. So I am going to challenge this on every level within my capacity.

It feels as though, as a people, we are becoming immune to the madness that surrounds us all. There is madness and sanity in the world. There is madness and sanity within each and every one of us. We must pander to the sanity and not stay silent to the madness that just allows the monster to grow. I have said this before but will say it again, there is a narrative going on this country that would have felt impossible even just a couple of years ago and it feels as though we are just letting it happen. Maybe it is like the experiment where a dog is locked in a cage and given electric shocks, so they move from one side of the cage to the other. Eventually, the dog just stops moving and accepts the shocks. Even when the cage door opens, the dog continues to just lie there. No idea who does these experiments or why or how a whole string of people think it’s alright to do it but I’m just using it as an example. Are we, by being bombarded, by all the shite that we are being bombarded with just lying there, with the cage door open, accepting shocks? So, personally, I refuse to remain immune. My act of rebellion will be to carry on giving a shit.

I still remain in the belief that people’s stories are one of the most important things in our world. Without our stories we would not exist. What is another statistic in the news is one person’s story that ripples across the world. I will keep on telling people’s stories and I urge people to do the same, to listen to people’s stories, to talk less and listen more and leap across all man created divides in the same way that stories are able to. As a shameless plug at this point, in Cambridge on the 20th January we are telling stories of displacement, loss, of our ancestors and it will be fantastic. Join Cambridge Storytellers to be inspired to tell your own family stories, we all have them, for better or for worse.

And in the vein of telling people’s stories, it’s still happening in Calais except it’s worse than it’s ever been. This is what is happening. More support than ever before is needed. If you feel inspired to help then there are organisations on the ground who would gladly welcome your time and there is plenty that can be done from the comfort of your own home. You can contact Refugee Community Kitchen Help Refugees or Care 4 Calais

There are local organisations that I’d be happy to point you towards but a quick google search usually does the trick. All of these organisations also work with local homeless people who are also sleeping out in these conditions. It’s not ok. There is research to show that volunteering does all kind of good things to you health wise as well. If this photo nudges you to do something then I doff my cap to you and give eternal thanks. If this photo does nothing to you at all then give your head a wobble.

Happy New Year. May 2018 be filled to the brim with random acts of kindness.