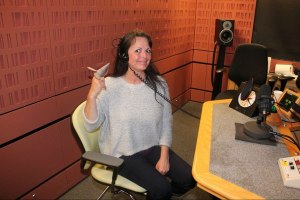 On Saturday 16th May I was lucky enough to be invited as a guest to speak on the great BBC Radio 4 Saturday Live. The morning was hosted by the Rev Richard Coles, Asamah Mir and J P Devlin, all voices that have long since been familiar to me as Saturday Live is one of my favourite programmes.

I was invited to tell a story from my childhood and about storytelling in general which is a topic that I could waffle on for hours about. Chris Tarrant was there to talk about a book that he has recently written about his Dad during World War II and it was interesting to hear of the impact that it has had on Chris in writing this book. I have recently been researching stories of my Grandad in World War I and it has been a real bumpy ride finding out things that went on at that time and how family were involved. And that’s the thing with stories – they create order out of the chaos of memories, emotions and thoughts that we have. Stories are tremendously healing.

Also on Saturday Live was Iain Lauchlan who presented Play School, a programme that aired when I was little and he brought the mythical Finger Mouse puppet with him. Dino Martins, an entemologist, was certainly the brains of the outfit as he talked about bees, pollination and his work in ensuring the continuation of our planet. We all felt a bit humbled by his work as it felt that we all go out and play for a living!

I don’t have a telly and Radio 4 has long since been a constant companion throughout my day. An absolute favourite is Woman’s Hour and the great team at the BBC humoured me by letting me sit in the great Jenny Murray’s chair, with her headphones on while holding Finger Mouse aloft. I can die a happy woman now.

In 2001 my son, Chris, was 12 years old and, somehow, we got to talking about ages. He was asking what I was doing when I was his age and I was asking what he thought he would be doing when he was older and we worked out that in 2012, from the 6th July (his birthday) to the 4th August (my birthday), he would be exactly half my age. As far as we could work out, that only happens once in a lifetime and we promised ourselves, there and then, that we would go on a road trip to celebrate this. The years passed, as they do, and 2012 came round in a blink of an eye. Chris was then 23 years old, had left home several years before but was still popping back and forth in between adventures.  We decided to go to Nepal. It had always been a dream of mine to go to Nepal and we decided that we would walk for a month. It was an amazing and very special trip for many reasons, not least because we got to know one another as, not just mother and son, but as adults. As part of our trip we had planned to walk to Lake Tilicho (in the photo) which lies at about 4,800 metres. Chris had altitude sickness but was determined to make the climb. What should have been a 2 hour climb took us all day as he walked for one minute and stopped for five and carried on like that for the whole day. When we reached Lake Tilicho it felt as though he had overcome the biggest challenge ever and he said “If I can do that, I can do anything!” For this reason, this photo remains an extremely precious memory for me and a reminder that we are the only ones standing in the way of what we want to achieve. My son has always been an inspiration to me, his kindness and courage are the greatest of anyone I know. I only have to look at this photo to be reminded of how incredibly lucky I am.